A historical journey through landscapes of great beauty, rich in vineyards and olive groves and unique geomorphological formations like the Balze del Valdarno. This itinerary departs from Porta San Gallo in Florence and arrives in Piazza Grande in Arezzo, following the route of the ancient Cassia Vetus. It can be explored either by bicycle or on foot.

This road is of considerable importance for Florence because, in addition to connecting the city with the lands on the right side of the upper Valdarno, where the so-called Via dei Sette Ponti takes you to Arezzo, it connects the city, at Pontassieve, with the eastern most of the trans-Apennine paths in the countryside. The road that leads to Dicomano, San Godenzo and the Alpe di San Benedetto to Forlì. It follows mainly secondary paved roads, but also grassy paths and gravel roads. The landscape is of great beauty with hills characterized by agrarian trees primarily producing wine and oil and unique geomorphological formations such as the Balze del Valdarno.

From Florence, the first stop is Pontassieve, a junction of great importance, so much so that in the second half of the 14th century, it evolved from a simple village, in the 'terra sive castri Sancti Angeli' into one of the military cornerstones of the Florentine state. The road starts in the town of San Pier Maggiore and proceeds parallel with the flow of the Arno. It follows the periurban plebeian of San Giovanni Battista in Remole, whose people were not, by chance, distributed along a strip of territory that developed longitudinally following the Arno precisely. The route was marked by the people whose churches were suffragans of the parish (Terenzano, Compiobbi, San Donato a Torri, Le Sieci). From the same parish church of Remole, you come, shortly after, to Sant'Angelo di Sieve (Pontassieve).

As soon as you cross the Sieve, along the Medici bridge built in 1555, the path veers right up the lower course of the main tributary of the Arno to Dicomano, continuing towards the abbey of San Godenzo. It was the trans-Apennine paths which, following the Alpe di San Benedetto, arrived in Romagna, a route that over the centuries moved travelers and goods, but not pilgrims, who preferred the Alpe di Serra road, a Romipetus route that surpassed the Apennines, in the Casentino area, and which had the undoubted advantage of leading them directly to Rome.

The Via dei Sette Ponti starts in Pontassieve, a road of probable Etruscan origin that in the middle of the Middle Ages flourished not only as a connecting route between Florence and the emerging country centers distributed along the slopes of Pratomagno, but also, to a certain extent, as a route to Rome, following, from Arezzo, the Via dell'Alpe di Serra as an important alternative to the Via Francigena.

The road, which follows the foothills of the Pratomagno, was punctuated by a significant alignment of plebane churches: San Pietro a Pitiana, San Pietro a Cascia, Santa Maria a Scò, San Pietro a Gropina, San Giustino Valdarno. Together these churches represent the main Romanesque religious architecture in the Valdarno area.

From Pontassieve, continue through the Reggellese area not far from the Vallombrosa Forest, where there are the parish churches of San Pietro a Pitiana and San Pietro a Cascia, which are home to the splendid Triptych of San Giovenale, an early work by Masaccio.

Following the Via Cassia, we arrive at the provincial road 1 Setteponti, which leads to Pian di Scò, with the Romanesque parish church of S. Maria in the Old Town, first mentioned in a document from 1008. Blind arches and two single-light windows adorn the facade. The interior, with its three naves, is marked by columns with figured capitals. On the left wall is a fresco depicting a Madonna Enthroned with Child dating from around 1400, by Paolo Schiavo.

Continuing towards Castelfranco di Sopra, the Abbey of San Salvatore a Soffena, a religious building built in the 14th century on a pre-existing castle deserves a visit and testifies to the presence of a Vallombrosan community in the Upper Valdarno. Inside there are priceless frescoes by Liberato da Rieti, Bicci di Lorenzo and Giovanni di Ser Giovanni known as Lo Scheggia (15th century). The latter was Masaccio’s younger brother. Next to the Abbey is the monastery, where recent archaeological digs have brought to light medieval and Renaissance tombs.

Once arrived in Castelfranco, you can admire the peculiar town planning, traditionally attributed to Arnolfo di Cambio, with a regular chessboard layout. It was once surrounded by walls, towers and gates, but only two remain today. Don’t miss the Oratory dedicated to San Filippo Neri (18th century), who was born here in 1515.

Continuing on the Setteponti, we arrive at Loro Ciuffenna, a medieval village that was once an Etruscan settlement. In the Old Town, don’t miss, the church of S. Maria Assunta, with a triptych by Lorenzo di Bicci (15th century), and the Venturino Venturi Museum, a tribute to the artist who was born here in 1918. For those who, from Loro Ciuffenna, would like to follow an alternative route through the woods and hills of the Pratomagno, we suggest Poggio di Loro and Rocca Ricciarda, two completely restored villages from which you can enjoy a spectacular view over the whole Valdarno.

Get directionskeyboard_backspace
map Show on map
Fifth leg
In Gropina, one of the oldest religious buildings in the Arezzo area

Continuing south towards Castiglion Fibocchi, you come across the Romanesque Parish Church of San Pietro in Gropina (12th century), one of the oldest religious buildings in the Arezzo diocese. Of particular interest is the interior, divided into three naves with columns and capitals, testimony to the great art of stone sculpting handed down over time. A bas-relief decorated with human and animal representations (a lion, an eagle and a deacon), supported by two knotted columns and two pillars, is the sculptural masterpiece of the church.

In the territory, there are other small Romanesque jewels to be discovered not far from Castiglion Fibocchi. The Parish Church of Galatrona a Petrolo, in Bucine, today named after San Giovanni Battista, is a Romanesque church of early Christian origin. In addition to its tabernacle, the precious baptismal font by Giovanni della Robbia is also worth a look.

In Cavriglia, there is the Parish Church of San Pancrazio, characterized by the crypt with cross vaults, divided into three small naves by small columns and the presbytery. The presence of the crypt and the asymmetry of the external rear section have led some to believe the church has older origins. In the apse are the remains of a fresco of the Madonna and Child with Saints Lorenzo and Pancrazio.

A little further on we arrive at Castiglion Fibocchi, a village built like a castle to guard the road that led from the Pratomagno to the Casentino. Outside the village, along the road to the left, is the Church of S. Maria a Pezzano, today the cemetery chapel with a fresco from the Arezzo school depicting the Annunciation (14th century).

Here, beyond the parish church of San Giustino near Castiglion Fibocchi, but before Arezzo, is the magnificent Ponte a Buriano, a bridge that has preserved its mighty medieval structure with its seven large arches crossing the Arno River. The bridge was painted by Leonardo da Vinci in the background of the Mona Lisa and the Madonna of the Yarnwinder

Get directionskeyboard_backspace
map Show on map
You might also be interested in
Food in art at the Uffizi Galleries
Historical villas and gardens in Tuscany
Fiesole: what to do, what to see
From Florence Airport to Florence city center
5 wines paired with 5 Tuscan dishes
Villas and gardens around Cortona
Big museums. Little visitors. Great adventures in Florence
Where to see the art of Bronzino in Florence 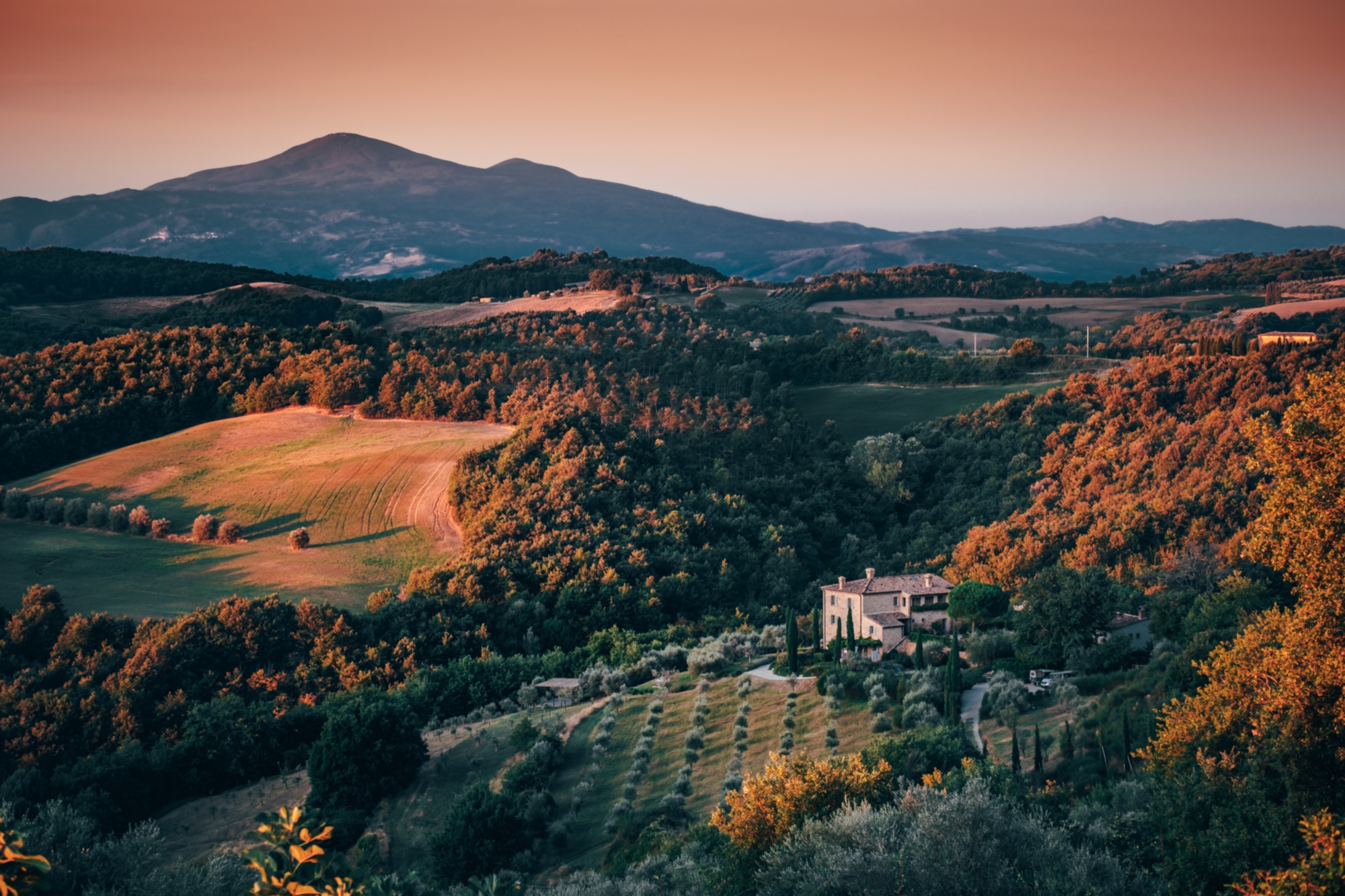 113 likes
Etruscan-related attractions
See all
A FASCINATING JOURNEY THROUGH THE HISTORY OF TUSCANYEtruscans keyboard_backspace
Ideas Bathing like the Etruscans
In this area
hotel 1747 Accommodation facilities local_offer 28 Deals event 70 Events
In this areaclose
hotel 1747 Accommodation facilities arrow_forward local_offer 28 Deals arrow_forward event 70 Events arrow_forward
10 fun things to do in the winter
Winter
collections Modigliani and the Adventure of Montparnasse. Masterpieces from the Netter and Alexandre collections From 07 Nov 2019 to 16 Feb 2020
thumb_up Disfida dei Falò On January 17 and 31
collections Hinthial: The Shadow of San Gimignano From 01 Dec 2019 to 31 May 2020
FACEBOOK TWITTER INSTAGRAM PINTEREST YOUTUBE FLICKR
Coast
Mountain
Countryside
Towns and Cities